How much are essential workers worth? 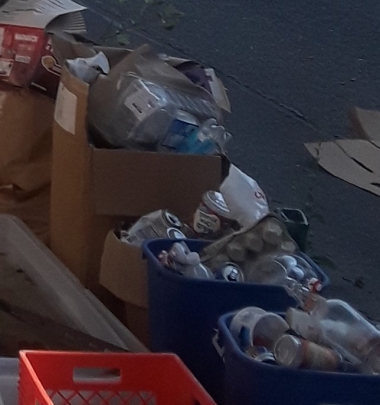 I heard caterwauling: “I’m gonna have to throw all this trash into the swamp if they don’t pick up soon. The frogs and the possums ain’t gonna like that.”

Swamp Rabbit was standing outside his shack, jamming empty beer cans and whiskey bottles into trashcans that hadn’t been emptied in weeks. His complaint was that Philly’s sanitation workers aren’t keeping up with the massive amounts of curbside trash — recyclables, in particular — being generated by people who’ve been staying home to avoid Covid-19.

“You wouldn’t keep up with the trash either if your job got more dangerous but your wages stayed the same,” I said. “Sanitation workers are essential, but their work conditions are terrible and they make about seventeen bucks an hour. Some other essential jobs pay even less.”

“I had an essential job, Odd Man. Then I got laid off.”

“You were a salesmen, rabbit. A hustler. Essential means the social order breaks down unless the job gets done.”

My arguments didn’t seem to faze him, maybe because he was playing devil’s advocate — i.e., pretending to be one of those jerks who don’t see anything wrong with arranging for the poor to sacrifice rather than the rich when the economy goes bad.

I told him that Philly’s mayor and some City Council members expect non-affluent residents to close the budget hole caused by the coronavirus pandemic. They would rather raise taxes on homeowners and cut funding for basic social services, public schools, the arts, etc., than try to make big corporations and major nonprofits contribute more during a crisis.

“The University of Pennsylvania has a $15 billion endowment and takes up 10 percent of the city’s land but pays no property taxes,” I said, warming to the subject. “And what about Comcast, which doesn’t have to pay taxes on its $1.2 billion Technology Center until 2027?”

Swamp Rabbit snapped opened a can of beer and laughed for a long time. “What planet you been on? Penn and Comcast and them other big guys get what they want or they threaten to leave town. What’s essential, trash men or two of the biggest employers in the city?”

“Penn and Comcast aren’t going anywhere,” I said, but I knew he would give no ground, so I didn’t bother mentioning things like PILOT programs.

He finished his beer and threw the can onto his rapidly mounting pile of empties.

“Okay, you win,” I said. “Just don’t whine anymore about the trash not being collected.”