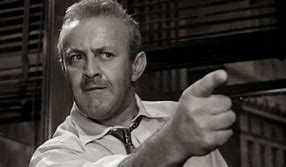 You can tell a lot about a president’s background just by his style of speech. Woodrow Wilson spoke like a cold-hearted preacher, FDR like an easy-going aristocrat, Harry Truman like a humble dry goods merchant, Ronald Reagan like a too-wholesome leading man in a B movie. And then there’s our current chief:

“The failing @nytimes wrote a Fake piece today implying that because White House Councel Don McGahn was giving hours of testimony to the Special Councel, he must be a John Dean type ‘RAT,'” Trump wrote, misspelling the word “counsel,” as he often does. “But I allowed him and all others to testify – I didn’t have to. I have nothing to hide……”

Trump is the first U.S. president to speak and write like he’s a mob boss, or a corrupt labor union leader. He sounds like Johnny Friendly (Lee J. Cobb) in On the Waterfront, railing against Terry Malloy (Marlon Brando) and anybody else who might rat him out.

At this point, potential “John Dean type” rats are everywhere. On Tuesday afternoon, in Virginia, Paul Manafort was nailed on eight of 18 felony charges. Minutes later, in New York, Michael Cohen pleaded guilty to five felony counts and implicated Trump while under oath. And now it’s been revealed that David Pecker, Trump’s secrets-keeper at National Enquirer, and Allen Weisselberg, the Trump Organization’s chief financial officer, were given immunity to testify in connection with the Cohen case.

Dirty rats, they’re all scurrying. As Johnny Friendly said, “Where you guys going? Wait a minute! I’ll remember this! I’ll remember every one of you!”