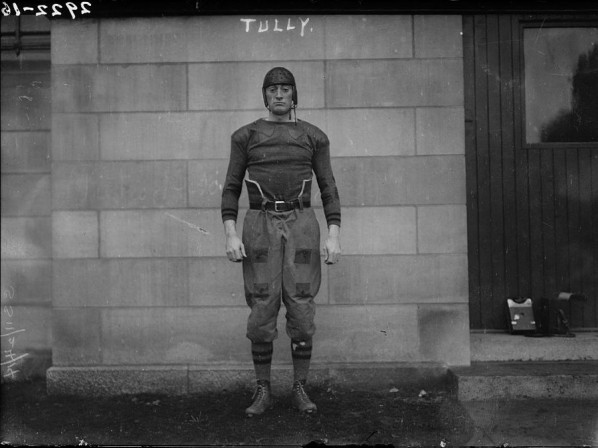 On Sunday there were sun flurries. Very pretty, swirling on the parking lot under a semi-clear sky, but only for a few minutes.

I was working outside a big-box store that sells sportswear. Ball caps bearing team logos, shiny clown sneakers. Loud, baggy jerseys with sports heroes’ names on the back in boldface caps.

I browsed the store to escape the cold and wondered whose domain I was in. A sound system with bad speakers pumped out ancient sludge. Chicago colored my world. David Lee Roth urged me to go ahead and jump. Most of the customers — male and female, black and white — looked like they’d jumped and fallen on their asses. Like they lived on Twinkies and slept in their clothes, in Dumpsters.

They were in “the fan zone,” pulling cheap-looking sportswear off the racks. Zip-up sweatshirts with no elastic, paper-thin T-shirts. They were buying this stuff, and it looked just like the stuff they were wearing. But it was expensive stuff, especially the items marked “official licensed product.”

Something was wrong with this picture. The unemployment rate is high, wages are stagnant or falling. Retail sales are down, even at Walmart. How could hobos afford $100 Eagles jerseys?

It occurred to me they might not be hobos. People in all income brackets dress like slobs these days. More important, my perspective is skewed. Poor and ugly can seem like the same thing when you’re going broke. These people were unfortunate looking but not necessarily poor. They could still pay with plastic.

I resolved to lighten up. Life was good. There was beauty in the world, I was just too beat to see it. Except for the sun flurries — those I could appreciate.

…The Walmart shoppers are exactly the demographic that is getting squashed in the contraction of this phony-baloney corporate buccaneer parasite revolving credit crony capital economy. Unlike the Federal Reserve, Walmart shoppers can’t print their own money, and they can’t bundle their MasterCard and Visa debts into CDOs to be fobbed off on Scandinavian pension funds for quick profits. They have only one real choice: buy less stuff, especially the stuff of leisure, comfort, and convenience…

Yes, but only after their credit is maxed out. There’s still a lot of plastic out there.

2 Responses to Sun flurries and sportswear in South Philly