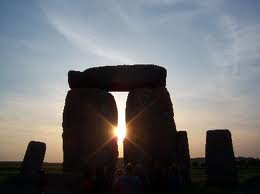 The winter solstice is here, marking for me the crossroads of dread and hope. Dread because it’s the shortest day of the year, when you can’t walk down the street without being reminded of consumerism’s holy of holies, Christmas Day. Hope because I know each day forward will bring a bit more daylight and some sense of progress toward the spring and the disappearance of Christmas decorations.

No offense to Christians, but acknowledging the solstice as a literal turning point — when the North Pole is tilted 23.5 degrees away from the sun, as far as it will get — makes more sense than celebrating the notion of a Jewish guy founding an anti-materialist (and, later, anti-Semitic) religion, then returning centuries later as Santa Claus, the poster boy for materialism.

So which is it, Christians — the Jew who was nailed to a board, or the jolly goy in the red suit? You can’t have it both ways, no matter what the ad copywriters say.

Keep your pale imitation of Saturnalia, thanks. I’ll take my materialism straight up, without the doubletalk. If I get a yen for spirituality I’ll consult with a card reader or make a pilgrimage to the Dalai Lama’s house. At least he knows what a joke is.

But I digress, as usual. Just wanted to send best wishes to pagans, Christians and everyone else. As Irving Berlin put it, “May your days be merry and bright, and may all your Christmases be goyish.” Or something like that.

Update: I just put solstice lights in my front window, the twinkly kind, to keep the darkness at bay. Christians and pagans are on the same page sometimes, but we like different stories.