Gaddafi to Cheney: Work your magic for me 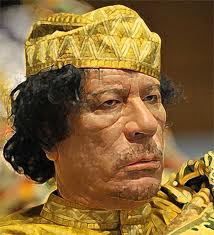 My Michael Jacksonian compound was breached, my beautiful Bedouin tent burned to the ground, my Galliano-yellow and iguana-green uniforms desecrated. Worst of all, precious photos of Leezza were stolen and defiled by marauding desert rats who are not fit to kiss my Nubian queen’s exquisitely flat feet.

Escape was a perilous undertaking, but Allah was with me, along with my palace guard of Amazons and my huge stash of pharmaceuticals. And yet the prospect of exile galls me, as does the blatant application of what American infidel dogs would call the double standard.

We are men of the world, you and I, so let me get to the heart of the matter: I am here in the desert scratching sand fleas while you, a war criminal and admitted advocate of torture, are engaged in publicity efforts regarding your new book, in which you boast of your crimes. Could you not find a way to work your magic for a fellow autocrat/ multimillionaire/war criminal?

Less than three years ago, Dick Cheney was presiding over policies that left hundreds of thousands of innocent people dead from a war of aggression, constructed a worldwide torture regime, and spied on thousands of Americans without the warrants required by law, all of which resulted in his leaving office as one of the most reviled political figures in decades.

And yet you are being treated as a dignified elder statesman by most reporters and by the hypocrites in the Obama administration. What is your secret? How may I undo the damage done by hostile media and the hundreds of Western power brokers who want to soil their soft little hands in my oil fields?

I fear that only you, the scum of the earth — and I say this as an admirer — can help me at this point. Any and all suggestions will be deeply appreciated and rewarded with appropriately Halliburtonian sums.

Your friend and ex-ally,
Muammar

2 Responses to Gaddafi to Cheney: Work your magic for me