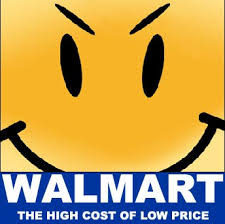 Swamp Rabbit and I had just watched a PBS show about “nightmare bacteria” — insidious, human-killing organisms resistant to all antibiotics. Pretty scary. Then we saw a news item about Barack Obama appearing at a Walmart to praise the company for using green energy. Really scary.

It occurred to me that Obama is the nightmare Democrat, an insidious organism resistant to all strategies and tactics for progressive change. During his time in office he has methodically hacked away, along with most Democratic legislators, at what remains of the Democratic Party’s credibility. There is no campaign promise he hasn’t broken, no Republican legislator he hasn’t caved in to, almost no Democratic constituency he hasn’t betrayed. He has disappointed on climate change, jobs creation, income inequality, regulation of big banks. He has eagerly pursued the so-called Grand Bargain, devised by right-wingers to shred the social safety net and put the final nail in the coffin of FDR’s New Deal. He is the anti-FDR.

I tried to express my feelings to the rabbit, but he wasn’t having any of it. “You way over the top, Odd Man. This here Barry fellow was a fake Democrat from the git-go, a neoliberal, a tool of the Wall Street posse, a brother to George W. Bush when it comes to violatin’ our First and Fourth Amendment rights. You sayin’ you was surprised when he went out of his way to make nice with Walmart?”

“But it’s not fair, you dumb rodent,” I shouted. “Obama walks like a progressive, he talks like a progressive. Man, does he ever talk! But the loftier his talk, the more perverse his actions. I mean, why would a Democrat single out Walmart for energy efficiency, even if it didn’t actually lag behind other some large companies on renewables? Walmart is the enemy of workers’ rights, the antithesis of everything the Democratic Party is supposed to stand for.”

The rabbit started chuckling when I said “not fair.” When he came up for air, he offered me a hit of Wild Turkey and invited me to take a swim in the swamp with him. I told him no thanks, I didn’t want to get infected by nightmare bacteria.

“Then you should git back to writin’ that book of yours and stop readin’ about politics,” the rabbit said.”That way you don’t git infected by no more nightmare Democrats.”