Margot Woelk, 95, recently confessed to having worked as a food taster for Adolph Hitler in his war headquarters, Wolf’s Lair, in what used to be East Prussia. She told the Associated Press that her job, like most jobs, had its good and bad points: 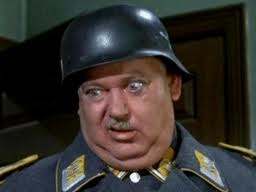 The food was delicious, only the best vegetables, asparagus, bell peppers, everything you can imagine. And always with a side of rice or pasta. But this constant fear — we knew of all those poisoning rumors and could never enjoy the food. Every day we feared it was going to be our last meal.

Woelk eventually fled to Berlin, escaping the fate of the 14 other women on the food-tasting team who were shot by the Russians when Wolf’s Lair was overrun. She has outlived the 20th century’s most infamous vegetarian by 68 years, but kept her past a secret, according to the AP story, “because of shame and the fear of prosecution for having worked with the Nazis, although she insists she was never a party member.”

She “never saw [Hitler] in person — only his German shepherd Blondie and his SS guards,” the AP report stated. This is unfair to Frau Woelk, but I instantly thought of Sergeant Schultz in Hogan’s Heroes — he knew nothing! Then I thought of “The Schmeed Memoirs,” in which Woody Allen imagines Hitler’s ex-barber describing life with Der Fuhrer and his cronies:

As I told the tribunal at Nuremberg, I did not know that Hitler was a Nazi. The truth was that for years I thought he worked for the phone company… At Berchtesgaden one day, Hitler turned to me and said, “How would I look in sideburns?” Speer laughed, and Hitler became affronted. “I’m quite serious, Herr Speer,” he said. “I think I might look good in sideburns.” Goring, that obsequious clown, concurred instantly, saying, “The Fuhrer in sideburns — what an excellent idea!”

Someday, when most of us are dead, George W. Bush’s remedial reading teacher, or maybe his barbecue chef, will emerge with a tell-all about the Iraq War years:

One day at the Crawford ranch, Dubya turned to me and said, “How would I look in one of them Air Force flight suits?” Rove laughed, and Dubya glared at him. “I’m not kidding, Turd Blossom,” he said. “I think I’d look good in a flight suit, with a ‘Mission Accomplished’ banner behind me.” Rumsfeld, that double-talking brown-noser, said, “The commander-in-chief in a flight suit — excellent idea! We can have you photographed wearing it on an aircraft carrier.”

Then Dubya’s chef will add, “It seemed like a good idea at the time.”