My birthday in outer space 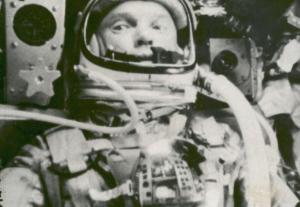 I love the past, which doesn’t exist/until I summon it, or make it up,/and I love how you believe/and certify me by your belief,/whoever you are, a fiction too,/held together by what? Personality?/Voice…?

— from “Loves,” by Stephen Dunn

My mother and I must have taken the #11 trolley to Center City and walked five blocks to the department store at Eighth and Market. I remember a row of TV sets in the store, each repeatedly showing a clip of a rocket lifting off, so that viewers could see the launch at Cape Canaveral had gone well. Walter Cronkite’s soothing TV voice provided further assurance that astronaut John Glenn was far above the atmosphere in his space capsule, single-handedly winning the space race against the Russians. This was in 1962.

Customers watched the multiple images of the ascending rocket. I could tell by Cronkite’s tone that Glenn was a hero. He circled the Earth not once but three times, in five hours. On TV, Glenn’s voyage seemed remote and undramatic, not at all like the sci-fi movie voyages I loved. But I knew his was a great feat, because it was taking place on my birthday, February 20.

I can’t remember why my mother was shopping, but on the floor where the toys were she told me to choose a present for myself. I picked a half-dozen plastic figurines shaped like astronauts — spacemen, wearing little helmets and spacesuits. At home that evening there was a birthday cake for me, and I planted my spacemen feet-first in the vanilla icing on top of the cake, and pretended the cake was the moon.

Along with most people, I figured Glenn or one of his space buddies would soon land on the moon, just as JFK had promised. After the moon, they’d go to Mars and beyond. I decided to become a spaceman. A few years later, America did land spacemen on the moon, but those landings marked the end of an era, not the beginning. We Earthlings couldn’t afford to visit other worlds, we were spending too much money destroying this one.

I considered other lines of work — archaeologist, deep-sea diver, bartender — and many years later settled on fiction writer, which is to say I became a sort of spaceman, exploring the gulf between dreams and realities, intentions and results, earthbound but always on the verge of becoming lost in space.

2 Responses to My birthday in outer space