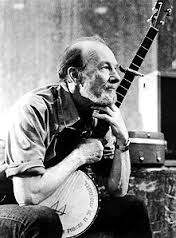 I was away from the swamp, stealing potatoes at the local Super Fridge, when I heard about Pete Seeger. This will be a rough day, I thought. Swamp Rabbit is an old leftie with a soft spot for New Deal-influenced folksingers, and Seeger, 94, was the last of that breed. Sure enough, the pesky rodent was weeping next to the wood stove when I got back to the shack. He drank Wild Turkey while I put the taters on the fire. Then we surfed for obits and skimmed old books.

The Associated Press used the phrase “ever-so-gentle rabble-rouser” and found a non-musical way to sum up the difference between Seeger and the only other folksinger, pre-Bob Dylan, who would have as big an influence on popular music:

On the skin of Seeger’s banjo was the phrase, “This machine surrounds hate and forces it to surrender” — a nod to his old pal [Woody] Guthrie, who emblazoned his guitar with “This machine kills fascists.”

The record will show that Seeger was as brave and well-respected as he was peace-loving. Dylan alluded to this in his memoir Chronicles: Volume One, while describing the day he was signed to Columbia Records by John Hammond:

Recently [Hammond] had brought Pete Seeger to the label. He didn’t discover Pete, though. Pete had been around for years. He’d been in the popular folk group The Weavers, but had been blacklisted during the McCarthy era and had a hard time, but he never stopped working. Hammond was defiant when he spoke about Seeger, that Pete’s ancestors had come over on the Mayflower, that his relatives had fought the Battle of Bunker Hill, for Christsake. “Can you imagine those sons of bitches blacklisting him? They should be tarred and feathered.”

Seeger had been blacklisted after testifying before the anti-communist House Un-American Activities Committee. He had politely told the honorables to fuck off:

I love my country very dearly, and I greatly resent this implication that some of the places that I have sung and some of the people that I have known, and some of my opinions, whether they are religious or philosophical, or I might be a vegetarian, make me any less of an American.

Then we read that Seeger “lost his cool” in 1965 because Dylan “went electric” at the Newport Folk Festival and the noise drowned out Dylan’s words. It was a familiar story, gossiped about many times.

“I forgave him for that,” I said. “Dylan’s show must have been a shock to a guy who was born more than 30 years before rock ‘n’ roll.”

“Well now, Pete’s ghost must be sighin’ with relief,” the rabbit replied. “Who gives a shit who you forgive?”

We read about Seeger’s inspiring appearance at Occupy Wall Street in 2011, and wondered whether Barack Obama would mention in his State of the Union address that Seeger’s life and art were exactly in sync with the social democratic policies that boosted the quality of life in mid-20th century America. Policies that have been under constant attack since Ronald Reagan took office.

“Oh sure,” the rabbit said. “Then the Democrats and Republicans is gonna hold hands and sing ‘We Shall Overcome.’ Hold the taters, you twit. Just pass me another bottle.”