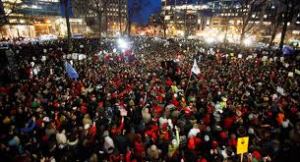 They're mad as hell in Cairo... I mean, Madison

Credit where it’s due: Not all mainstream reporters are treating what’s happening in Wisconsin as a budget-related spat over cuts in benefits. In today’s Philadelphia Daily News, Will Bunch considers the global context of the story and ponders the likelihood of workers’ protests in other states where Republicans would like to crush organized labor, including Pennsylvania.

Bunch even mentions the link between Wisconsin Gov. Scott Walker and Koch Industries, a relationship that helps explain why Walker’s attack on labor has been so swift and vicious.

Also today, on his online site, Bunch links to a blogger who explains how Walker’s so-called Budget Repair Bill calls not only for union-busting but also for selling state-owned power plants to private companies, without bidding or input from the public.

Does the DN’s sharp coverage mean that the news media in general is on the verge of taking a serious look at the extent to which both major political parties in America have come to be dominated by corporatists, also known as fascists? I doubt it, but it’s good to know that not all journalists are ignoring the obvious.

Footnote: A labor rally in support of Wisconsin workers is scheduled for 11:30 a.m. Thursday at LOVE Park in Philly. That’s in case the idea of working for the pharoah doesn’t appeal to you.

We prattle on about the past and future of Oakland A's baseball with a rock n' roll rebellious spirit and an eternal love for Milton Bradley.