From ostrich jacket to jailhouse jumpsuit 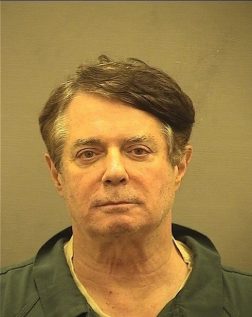 This is what happens when you have all the money in the world but no heart or imagination:

The allegation took flight in federal court Tuesday, where prosecutors charged that Manafort’s luxuries and bank account benefited from his alleged financial fraud. Specifically, attorney Uzo Asonye accused the lobbyist of not paying taxes on money he earned while working in Ukraine for a political candidate, then using the dough on indulgences like a $2 million house, $21,000 watch and a custom, $15,000 jacket made from an ostrich.

He was a high priest of materialism who couldn’t stop buying suits and carpets and houses and weird vanity gifts for himself. A karaoke machine. You simply have to have one if you entertain.

He was a consultant to dictators, a guy who specialized in spreading misery around the world. Where do such people come from, and isn’t it telling that they flock without fail to degenerates like Donald Trump?

He spent much of the past few years on a buying spree, indulging himself while he could, as if he knew he’d eventually get nailed by the IRS or the Russian mafia.

“You can’t take it with you,” should be carved on his tombstone, if he has enough money left for a tombstone.

2 Responses to From ostrich jacket to jailhouse jumpsuit