The sport of kings, and of corporate welfare 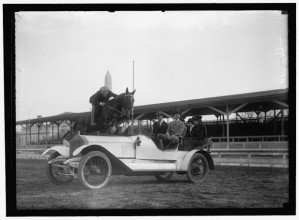 Most non-fans of horse-racing, if they think of the sport at all, probably picture frantic racetrack patrons at ticket windows, or at computers, placing last-minute bets as horses and jockeys mosey up to the starting gate. But an article on Philly.com today explains why it’s incorrect to assume the horse-racing industry in PA is funded by people who gamble on horses:

…Rather, it’s funded by the tens of thousands of small-time Pennsylvania casino patrons who play — and lose at — slot machines. Thanks to a law written primarily by the horse-racing industry itself, slots players — many of whom are retired and elderly — are the primary funders of what some consider a massive corporate welfare program that props up the state’s horse-race industry, and often benefits rich horse owners.

In just six years, more than $1.5 billion has gone to horse owners, race-horse breeders and others in the industry, thanks to a little-known state subsidy that feeds 12 percent of casino slot revenues to the horse-race industry. Last year, slots pulled in $2.4 billion in revenue. While schools struggle, pension funds decline and the state’s roads and bridges crumble, many of the recipients of the horse-race subsidy are out-of-state multimillionaires. Some are billionaires several times over…

Way to go, Ed Rendell, and all you other politicians who played a part in linking the casino racket to horse-racing, once called the sport of kings, which was on its last legs, so to speak, before receiving a massive infusion of cash from the serfs who play the slots.

Footnote: The philly.com story neatly illustrates one of the ways in which state-sponsored casino gambling pretends to pump up regional economies while actually draining money from them.

1 Response to The sport of kings, and of corporate welfare