No mercy from bailed-out BofA 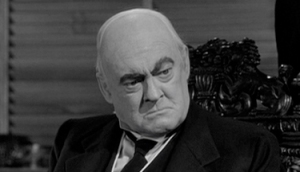 Mr. Potter of It's a Wonderful Life was a very visible villain. Bank of America CEO Brian Moynihan does most of his dirty work in the dark.

In the not-so-distant past, one of the most reviled characters in American popular culture was the landlord who threw families into the street if they couldn’t afford to pay the mortgage on their homes. Think of Lionel Barrymore as Mr. Potter in It’s a Wonderful Life.

Villainy in our time often isn’t as easy to personify. It involves robo-signing and other illegal foreclosure practices. It is delegated and administered through corporations that have vast real estate holdings. Most of the people involved in foreclosures and evictions are invisible. They don’t have to witness or even hear of the misery they cause. Sometimes they even deny having anything to do with it.

Dirma Rodriguez had five minutes to gather her things and vacate the West Adams house she and her severely disabled daughter had lived in for more than 25 years. As a property manager changed the locks, Rodriguez fluttered back and forth from the yard – where a pile of stuff lay by the kitchen stove – to her car, where her daughter, Ingrid Ortiz, sat screaming and crying.

How Rodriguez and Ortiz ended up in this predicament is a long, messy story that resounds with a misery all too common in this age of foreclosure.

Rodriguez took out a loan to retrofit her house for her special-needs daughter. After she fell behind on her payments, the Bank of America lowered her monthly obligation, but then sold the house at a foreclosure auction last September. The new owner, a house flipper from El Segundo called West Ridge Rentals, moved to evict the family.

I came upon Rodriguez’s story through Occupy Fights Foreclosure, the latest offshoot of the 99% movement. Occupy interceded to stop her eviction March 26, and it just may have saved her home for good. Bank of America said last week it is considering a loan modification that would return the home to Rodriguez and her family.

But how did it come to this? Bank of America took a $45-billion bailout from taxpayers when it got into financial trouble. Why couldn’t the bank have shown Rodriguez – a widow whose life was already a trial – the same courtesy when she got squeezed?

One answer to that question is that the Obama administration agreed to a settlement on the robo-signing scandal that, as Slate noted, “barely punishes the huge banks behind the foreclosure crisis.” Now that they’re been fined and are off the hook, the banks can go back to throwing people into the street with impunity.

Which is not to say that a Republican administration would have handled the mortgage crisis more honestly. On the contrary, the big banks wouldn’t even have been fined.

4 Responses to No mercy from bailed-out BofA