Sorry, nepotism on the bridge!

One of these years, DRPA will finish bike paths

The mission: To get used to commuting by bicycle between Center City Philadelphia and Camden, NJ, using the Benjamin Franklin Bridge. Peddling the mile-long stretch takes about 10 minutes, includes beautiful vistas of the Delaware River and is a cheap alternative to driving and public transportation.

The obstacle: The 84-year-old steel suspension bridge, like most thruways in the region, isn’t bicycle-friendly. Only a few hundred cyclists per day and roughly as many pedestrians make the bridge crossing, compared to about 100,000 motor vehicles and 40,000 commuters on the PATCO train line. Cyclists on the Philly side must brave heavy auto traffic on streets that have few bike lanes and don’t directly connect to the bridge’s concrete walkways, which double as bike paths.

The walkways – each is about 12 feet wide at most points – run on either side of the bridge’s seven vehicular lanes and above the PATCO tracks, bordered by steel suspension cables, sturdy metal railings and light fixtures. However, only one walkway is open on any given day, and signs posted by the Delaware River Port Authority, which maintains the bridge, caution that crossings are “At your own risk.” 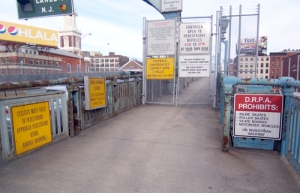 The south-side walkway begins on an upward slope that continues for several blocks over Philly’s riverfront, past one of the stone towers built into the bridge to serve as public transportation stations. These were never used for that purpose because trolley use fell off drastically in the ’20s as more and more people began commuting by car.

Midway across the river the walkway slopes downward, passes another tower, narrows by half and then abruptly ends at the top of three flights of metal stairs on the Camden side. The north-side walkway is less frequently used because it narrows near Camden to the width of a cattle chute, so that cyclists approaching from opposite directions must dismount in order to squeeze past one another. One either side, one must carry his/her bike up or down the stairs or “walk” it along awkwardly placed ramps that run next to the stairs.

Biking over the bridge can feel bizarre but is not all that risky, if my two dozen crossings this summer are an indication. On a recent hot afternoon I encountered a dozen or so cyclists and joggers, alone or in pairs; a DRPA policeman in a vehicle just small enough to allow a cyclist to pass at the same time in the other direction; and a man and woman, both nearly naked, huddled next to one of the towers. The woman covered herself and shouted, “Sorry, having sex on the bridge!” This was perhaps to remind me that traffic on the walkways has been light for a long time and will only increase if government puts more money and effort into upgrading it.

John Boyle, research director for the Bicycle Coalition of Greater Philadelphia, recently said that improvements to the walkways are in the works, including a bike ramp to be built in 2012 to replace the stairs on the Camden side. He noted that bicycling advocates already have helped persuade the DRPA to extend the hours during which walkways are open from 6 a.m. to 9 p.m. in the warmer months and 6 a.m. to 8 p.m. in the fall and winter. Other proposed changes are listed on the Bicycle Coalition website.

Ed Kasuba, director of corporate communications for the DRPA, confirmed the interstate agency plans to replace the stairs with a ramp. He referred questions about the “At your own risk” signs to the DRPA’s legal department, which could not be reached for comment this week, possibly because it is busy fielding complaints about other matters. The DRPA has been under fire for months for patronage hiring, for providing free train rides and bridge passes to employees, and for spending millions of dollars on projects that have nothing to do with transportation. Maybe some of the money could have been used to improve the walkways.

Boyle’s advice to fans of the walkways: “Contact the DRPA and say I support further improvements. I use the bridge and would like my trip to be easier and safer.” The agency can be reached at 877-567-3772.