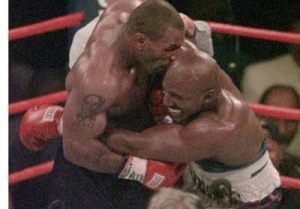 Mike Tyson bites for his life.

I’m way behind on celebrity gossip. It turns out Mike Tyson says he appeared in the movie The Hangover because he needed drug money, but the big story – the one that apparently broke way back in May – was that Iron Mike, the former baddest man on the planet, the boxer who bit off part of Evander Holyfield’s ear, had lost a lot of excess weight after becoming a vegan. How did I miss this? Who’s next for vegan-ism, Michael Vick?

This entry was posted in sports and tagged Evander Holyfield, Mike Tyson, vegan. Bookmark the permalink.

1 Response to No more ear meat for Iron Mike